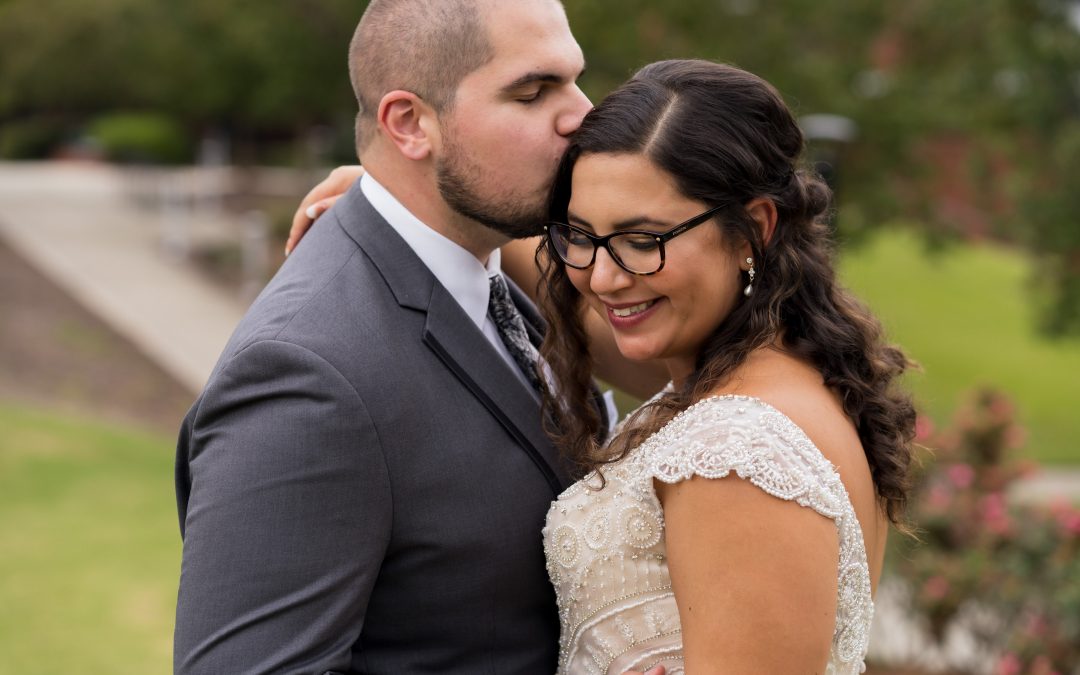 When Alzebeth & Tony set their wedding date for 10/10/2020, they had no idea how many times their plans would change! This incredible couple was so flexible, understanding, and willing to do whatever it took to say their vows in a way that wouldn’t put any guests at risk.

Their first plan included 150 guests at an indoor venue. And then the gathering restrictions began. 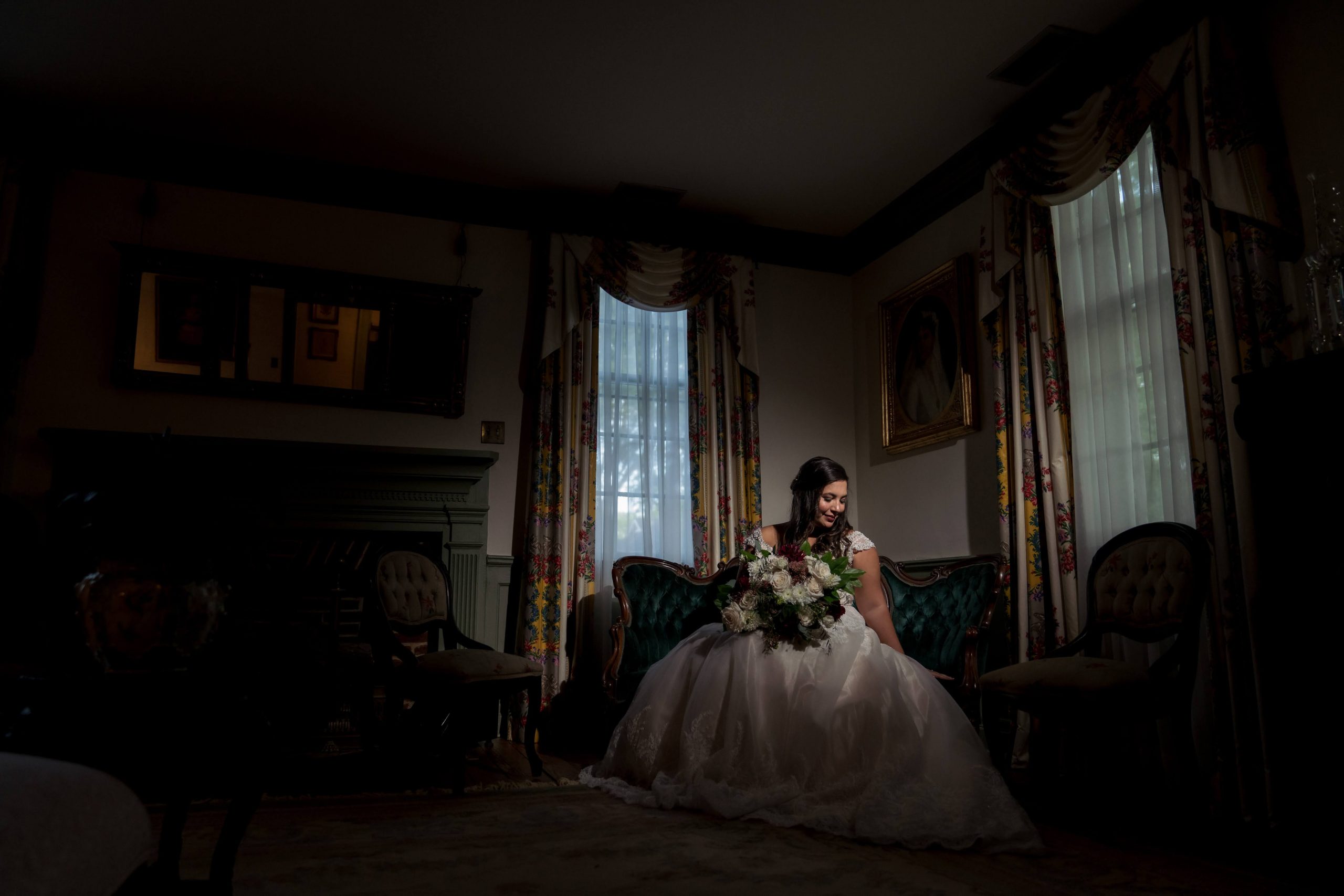 The second plan included a split guest list. About 50 guests, including family and the wedding party, would be in attendance for the ceremony & dinner. We’d do a room flip after dinner, say goodbye to the family while the venue did a wipe down, and then have a dance and bar reception with 50 or so friends in attendance.

And then the bars closed and receptions weren’t allowed.

The third plan included moving to a different, fully outdoor venue for the mini-mony, so older guests would feel comfortable attending. Receptions weren’t yet allowed, so we planned to have a champagne toast at the end of the ceremony. The overall guest count was lowered to 50 instead of having a split count.

Finally, the guidelines shifted, allowing outdoor receptions that followed social distancing guidelines and gathering limits. After all the changes, we were all exhausted and super ready for Alzebeth & Tony to have a magical wedding day.

“Working with Stephanie at Beauty and the Budget events was one of the best choices we made when it came to our wedding. At the time we booked Stephanie, we didn’t expect a global pandemic, shut downs, and social distancing restrictions, but she helped us navigate through all the messy uncertainty to deliver a wedding day that truly exceeded our expectations. Some of our favorite aspects of working with Stephanie included:
– She was always prepared to review scenarios under the changing regulatory environment. We navigated through at least 5 different scenarios and “what ifs” in the three months leading up to the wedding due to changing covid restrictions and she approached each one with an eye on all the details we were missing.
– Prior to COVID chaos, Stephanie was able to provide helpful recommendations through both her blog / previous vendors she’d worked with as well as doing custom vendor searches for us.
– Stephanie was both a calm presence and a passionate advocate for us. When there were questions/stresses about certain vendor relationships or concerns she was always there to pick up the phone and provide a new perspective and great advice
– She knew every detail of our wedding day and asked great questions that allowed us to be fully present in our wedding day without stressing about all the moving pieces. All we had to do was show up and have the time of our lives!
– On the day of the wedding, Stephanie had more than she imagined on her plate, considering we’d completely moved venues and were required to do a lot more, with a lot less help. Even with this added pressure, she executed our wedding day, and especially the decor, just as we envisioned.
2020 was a complete dumpster fire of a year, but we are so grateful to have had Stephanie as our wedding planner for an experience of a lifetime.”
Alzebeth & Tony, Partial Service

On the morning of October 10, I arrived at the hotel where the ladies were getting ready, carrying buckets of bouquets. I got there just in time to watch Alzebeth have a first look with her mom and bridesmaids. She’d changed her wedding dress without telling anyone, so they were all surprised by the gorgeous princess gown she wore. The ladies finished getting ready and headed to St Mary Magdalene in Apex for the early afternoon Catholic wedding ceremony.

My team headed over to Haywood Hall to set up for the rest of the day while the couple officially said their vows. The day was sunny and beautiful as the couple took photos at the church and guests made their way to the venue. The bride’s stepsister greeted guests as they arrive, escorting them to an assigned seat for the outdoor ceremony. 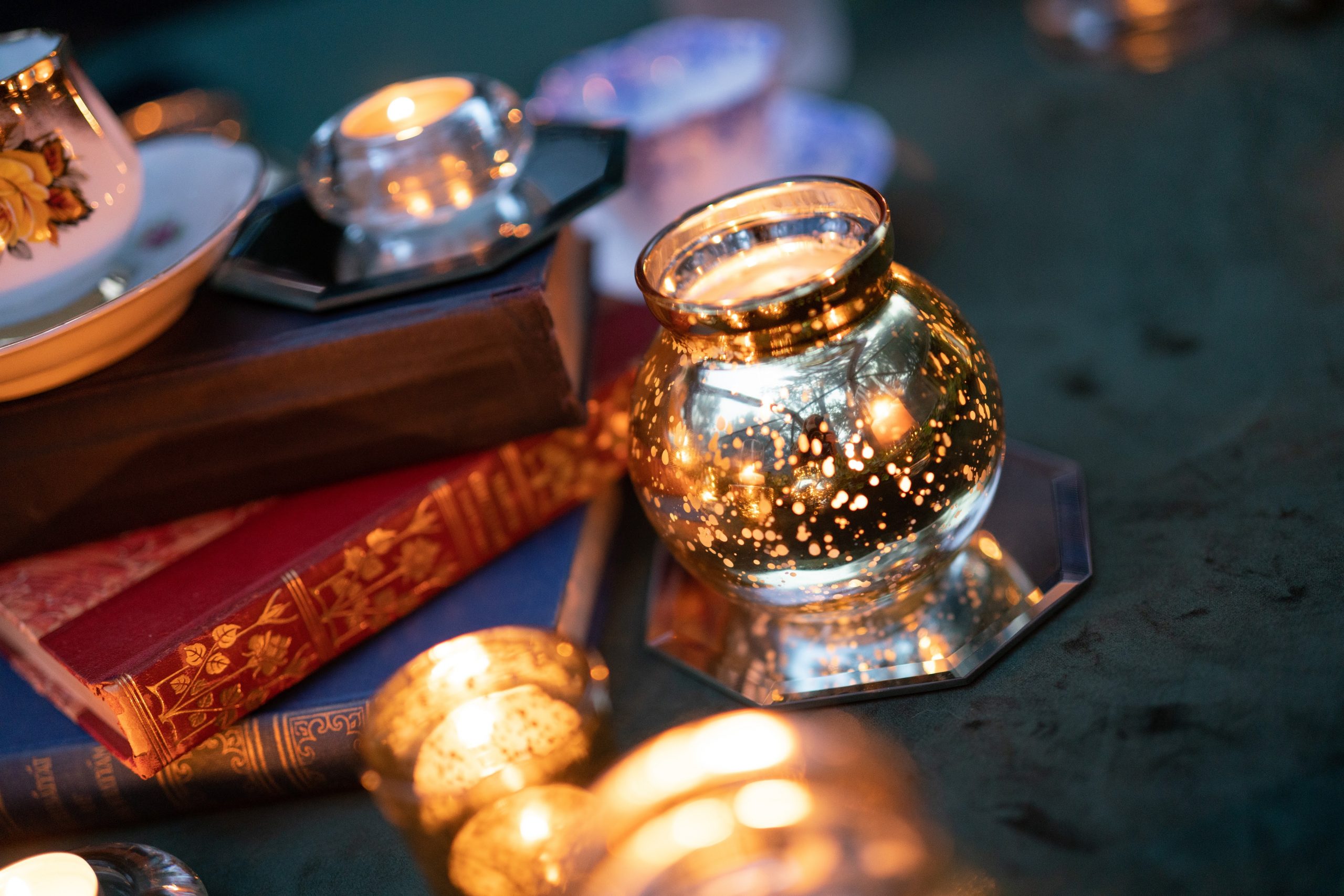 The couple arrived at Haywood Hall early to take some photos while their awesome wedding party started setting up centerpieces with us and Tony’s parents set up the cake his mom baked. Each centerpiece was an eclectic mix of vintage books, tea cups and saucers, various votives, mirrors and ivy, with table numbers in a light gold script. The couple’s table was taken to the next level with a dark green velvet tablecloth, greenery garland and floating candles.

With everything ready to go, the officiant took his place and asked that guests put phones away. The live stream began, the DJ pressed play, and three of the groomsmen walked out the front door to their places for the ceremony, followed by the parents of the groom and mother of the bride who took their seats. Once the bridesmaids walked out to their side of the aisle, the song changed from “Marry Me” by The Piano Guys to “I Was Made For Loving You” by Tori Kelly. After a hesitant flower girl made her way down the aisle, the guests stood and turned to watch Alzebeth, escorted by her brother Vincent, walk down the aisle. 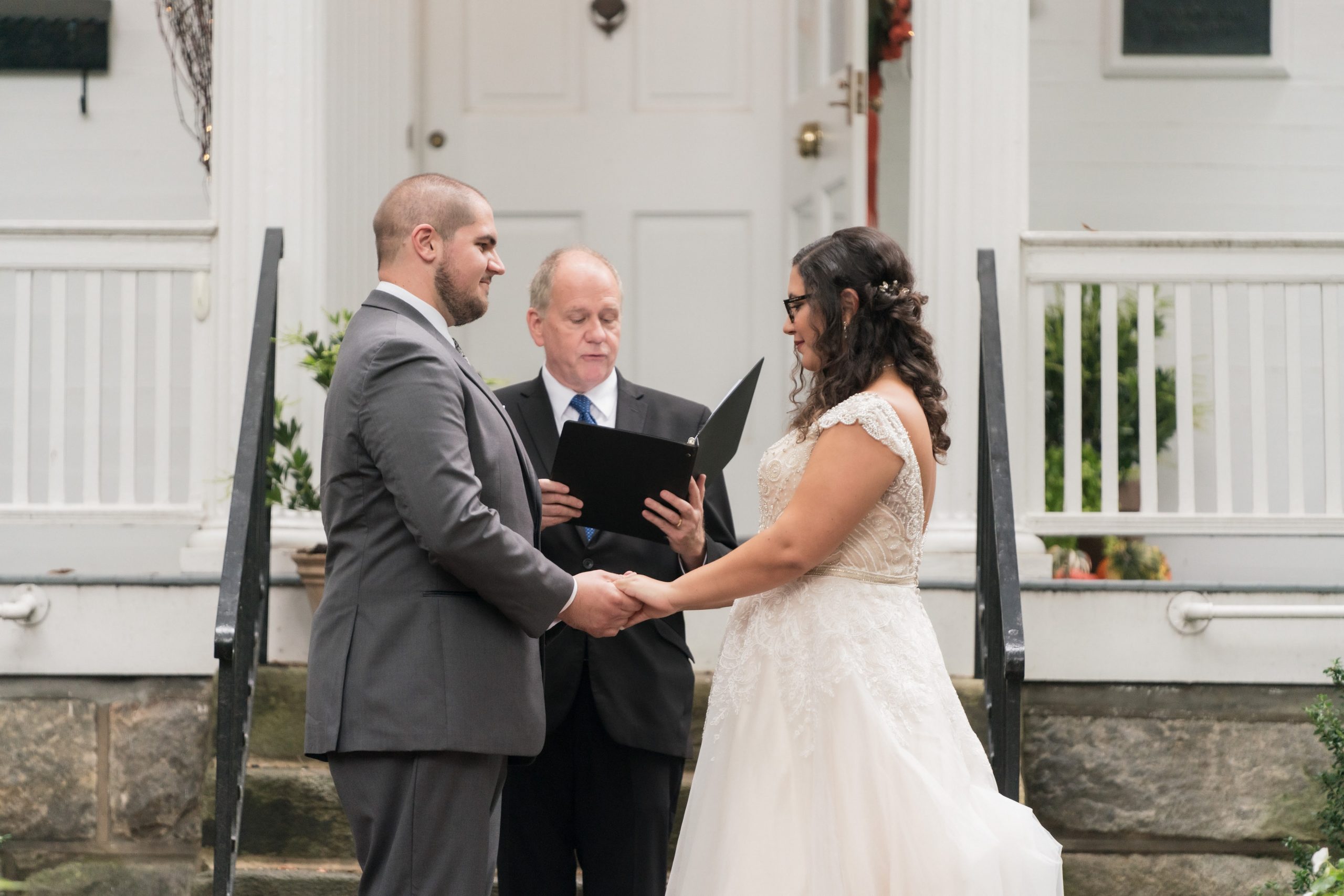 With a kiss on the cheek, her brother went to stand with the groomsmen while Alzebeth took her place beside Tony. The bride’s mom and sisters were seated in the front row near Vincent, angled toward the ceremony so they could all see the American Sign Language translator who sat discreetly near the front of the ceremony. Along with their vows and a beautiful telling of their love story by Personal Weddings by NC, one of Alzebeth’s sisters presented a reading while Vincent signed along. With a second “first kiss,” the couple recessed down the aisle, everyone took the paper streamer from under their chairs and threw them into the air; the streamers totally didn’t work, and the collective laughter could be heard across the venue.

During cocktail hour, guests spread out around the courtyard, enjoying their drinks until someone came to get them. With the intimate guest list, Alzebeth & Tony were able to make sure they got a great photo with every guest and group. As photos wrapped up, dusk was falling and the lightest drizzle began, cooling down the hot day. We lined up the wedding party, and they danced their way into the reception tent to Alzebth & Tony’s hype playlist, with the DJ calling each pair…

J & A: My house – Flo Rida (fade intro to start at 30 seconds where he says “Sometimes you gotta stay in”)

And last, Alzebeth & Tony entered to “Ritmo,” which faded into their first dance – a mash-up of Perfect (Ed Sheeran & Beyonce) and “Say you won’t let go” (bachata version). With laughter in their eyes, the couple went to their sweetheart table, and Tony said a quick welcome to their guests. The mic was then handed off to his dad, who shared his love and appreciation for their guests, and the Wolfpack, since the lovebirds met at NC State. Our team joined City BBQ in passing out individually packed brisket and turkey dinners to guests at their tables, and a few more folks stood up to share stories and wish blessings on the couple, including the best man, maid of honor, and mother of the bride. 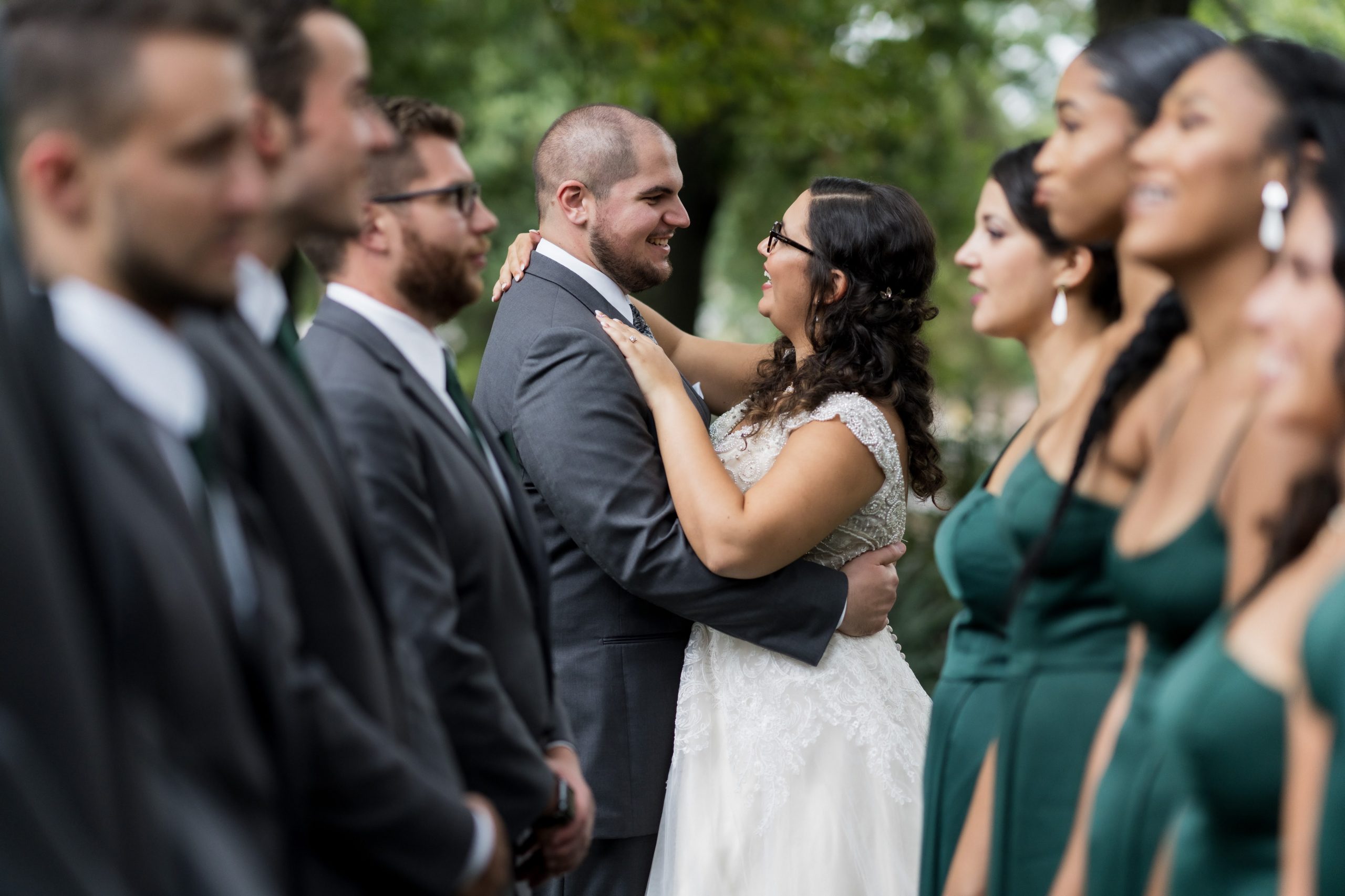 The rain started coming down on the clear tent roof as guests finished dinner. Alzebeth & Tony each had a parent dance before the couple and their wedding party hit the dance floor. The remaining guests danced beside or stayed seated at their tables until they chose to brave the rain for the bar. The cake had been set up in a gazebo on the property, so we moved it to the sweetheart table under the tent, and from there Tony gave a thank you speech before they cut the cake. Individually boxed cupcakes, also made by mom, were set out for guests to enjoy. as they headed off at the end of the night.

In honor of Tony’s love of speeches, I’d like to end this blog with a toast of my own. To the groom! To the bride! From your planner, who’s been right there by your side! (Sorry, I couldn’t help myself there). But honestly, working with y’all was a bright spot of 2020. Alzebeth is the first client who was a friend first, circa 2013 at NC State, and I’m so glad I was able to help her navigate 2020 on her way to marrying Tony. When y’all booked me in June 2019 for the most popular date of 2020, we had no idea how much wedding planning was going to change in the coming year.

You two have been troopers, rolling with the punches and shifting guidelines through the craziest year of our lives, and I hope you felt as relieved by working with me as I felt encouraged by working with you. Also, shoutout to your family for being so gracious as I navigated conversing through an ASL translator for the first time, and to your wedding party for making a 90-minute setup window possible. Cheers to the vendors who navigated the changes with us, and for helping us pull off a safe, fun wedding for this awesome couple. 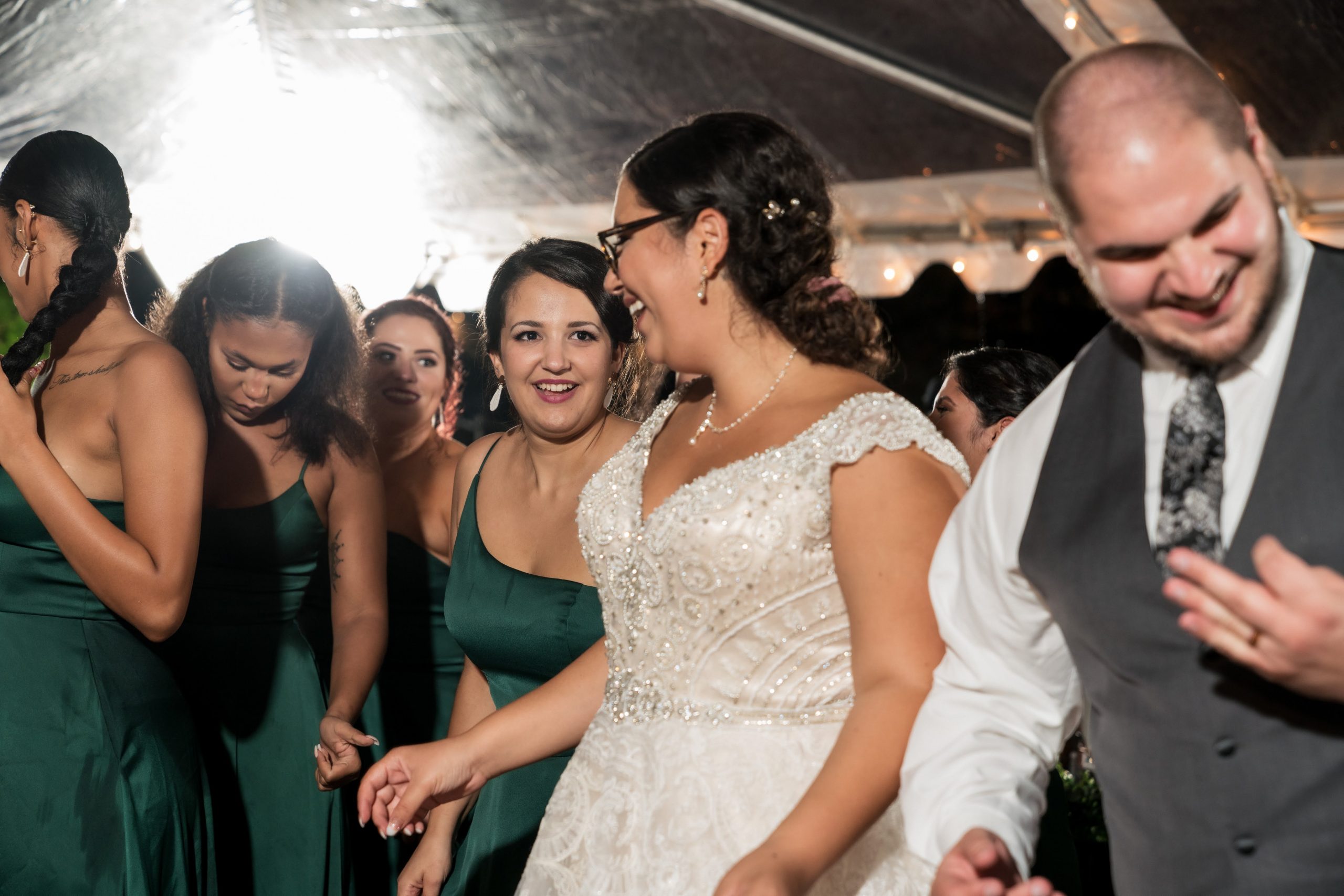 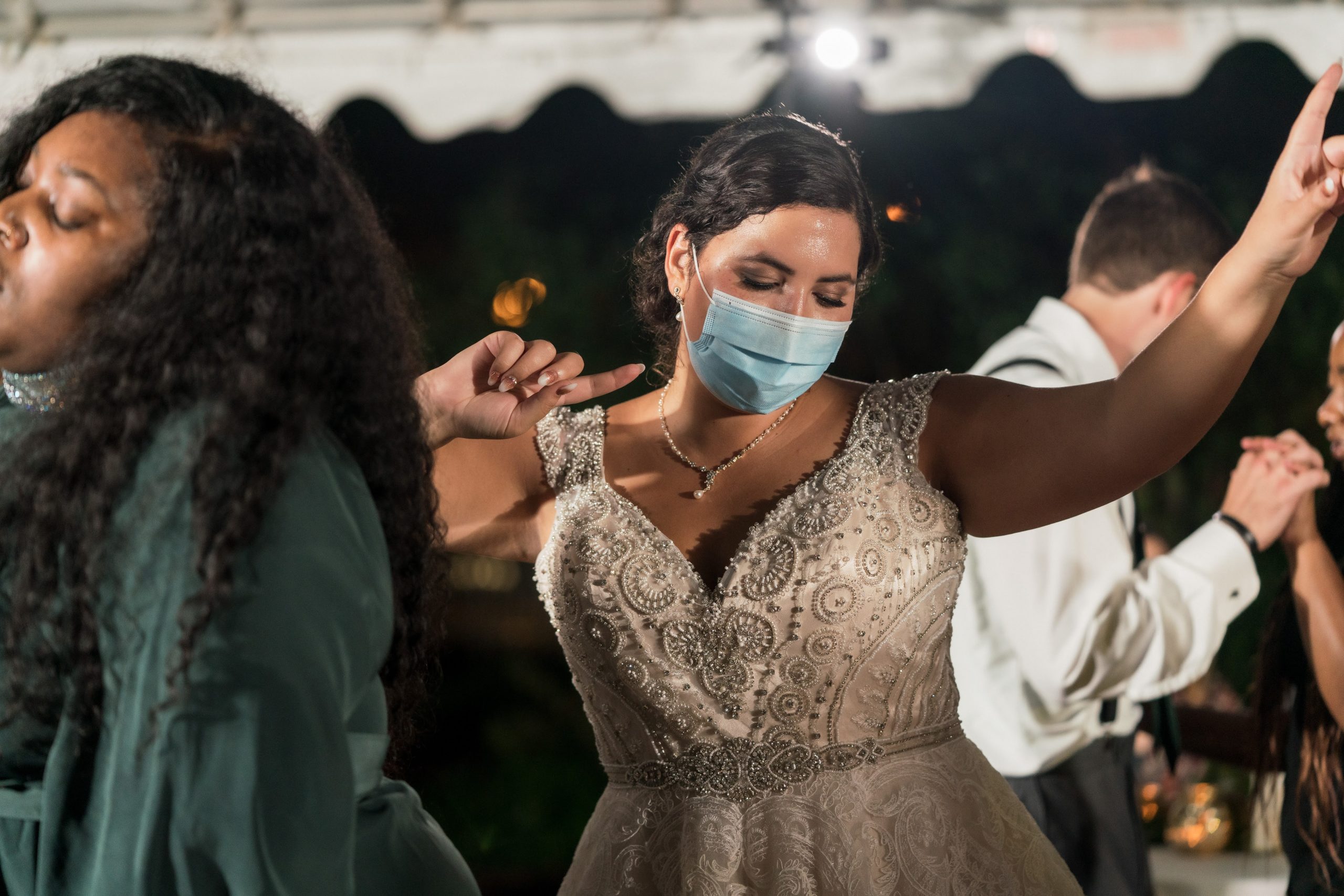 Cake: Mom made the cake