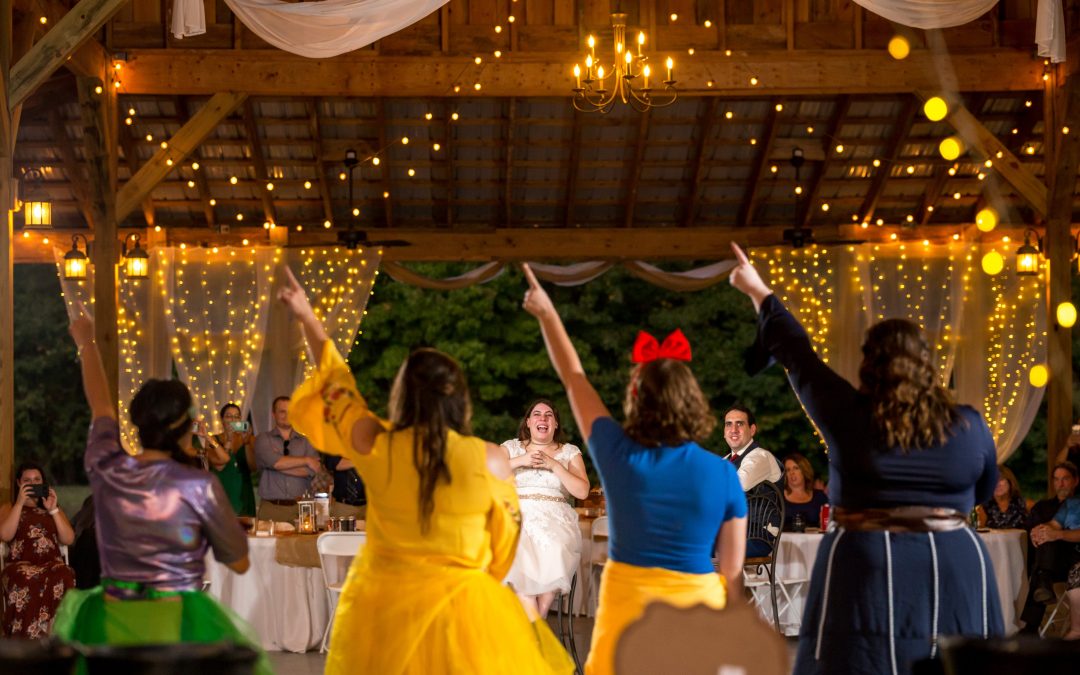 Hillary & Andrew might just be the happiest hearts on earth. These two Disney lovers celebrated their love story on Sep 28, 2019, with decor and style that truly represented their relationship. See, they’re not just fans of Disney movies; Hillary worked in the parks for over a year, and that’s been a huge part of their life and relationship.

With the ceremony about to begin, the couple and their wedding attendants gathered in the farmhouse and guests took their seats. The back of the ceremony was decorated with wooden french doors, a funny unplugged ceremony sign, and a pick-a-seat-not-a-side sign. The backdrop for their ceremony was a wooden arbor draped with white fabric and flowers, and the aisle had mason jars filled with fall flowers on shepherds hooks.

The ceremony started with the grandmothers and parents walking out to “Kiss the Rain” by Yiruma, and then the groom made his grand entrance to “Romantic Flight” from How to Train Your Dragon. I LOVE that the couple decided that the groom got his own entrance song, this was so special. Finally, the bridal party, carrying lanterns, and the bride, escorted by her dad, made their entrance to “Younger Than Springtime.” The officiant for the wedding, Hillary’s Uncle Roger, was kind enough to share the ceremony with me, and one of the most special parts of their otherwise traditional Christian ceremony was when Roger shared about Hillary & Andrew’s relationship:

“So I have known you your entire life, Hillary, from when you were a tiny baby with a head full of hair, to when you were a toddler, running around Grandma and Papa’s house at the beach with your sister and cousins, to the teenage ‘drama queen’ years. (Remember those years, Hillary? They don’t seem so long ago, do they?) And now here you are, a mature young woman, about to embark on an exciting new phase of your life.

“Now Andrew, on the other hand, well, to be honest, my wife and I thought for a long time you didn’t exist, because the way Hillary talked about you, you sounded too good to be true. We didn’t have the pleasure of meeting you until fairly recently, after you and Hillary had decided that you were meant to spend the rest of your life together.

“It has been such a joy and a pleasure to get to know you over this past year, Andrew, and especially the last few months. At the same time, Hillary, I feel privileged to have had the opportunity to really get to know you as an adult. Talking to the two of you, learning how you met, how Andrew ‘courted’ you (I love how you described that), watching your interactions, how you both give and take, the obvious love and affection you have for each other – this has been a joy to see. We have had some serious conversations on real-life topics, and I can say with confidence that you two are very well prepared to take this next step.”

As the ceremony wrapped up, the couple shared a kiss and danced down the aisle to “Happy Together” by The Turtles. Guests were invited to the pavilion for cocktail hour, with a handpicked selection of craft beers from Gizmo BrewWorks based out of Raleigh. Meanwhile, the couple ran around the farm with their photographers, who had also photographed Hillary’s older sister Elizabeth’s wedding.

Cocktail hour closed and the bridal party and couple were introduced into the reception, immediately followed by the couple’s first dance to one of my FAV songs, “Take My Hand” by Emily Hackett & Will Anderson. Seriously, between this couple being too cute with each other and my love for this song, I was standing in the corner tearing up. No shame. Parent dances followed, and then it was time for dinner. Instead of table numbers, each guest was assigned to a table by Disney FastPass, so they might have been assigned to The Haunted Mansion, Space Mountain, or any of the couple’s other favorite attractions. Wooden flowers, fall leaves, and lanterns decorated the tables, and a few random llamas made their appearance in the decor.

As dinner came to a close, Hillary ran off for an outfit change, but she had no clue her dress change wouldn’t be the only one that night. When she returned, Hillary & Andrew played the shoe game and best man Chris gave a great toast. It wasn’t until the end of his toast that Hillary realized all her bridesmaids had disappeared. She asked me where they were because it was time for the Matron of Honor’s speech, and I just gave her a wink and told her it’d be fine. A moment later, MoH Elizabeth led the rest of the bridesmaids onto the dance floor in Disney costumes, and the ladies performed a surprise musical toast combining Hillary’s favorite Disney fireworks show, Wishes, with “Super Trouper” by ABBA since the bride loves Mamma Mia! Hillary was so surprised and kept switching between tears and laughter.

Once Hillary was able to catch her breath again, she and Andrew cut their cake with a cake knife used by her parents and her sister and brother-in-law on their wedding days, engraved with all three wedding dates. City BBQ started serving up a s’mores bar (one of their first dates included making s’mores), and the dance floor opened up for guests to enjoy the rest of the evening. 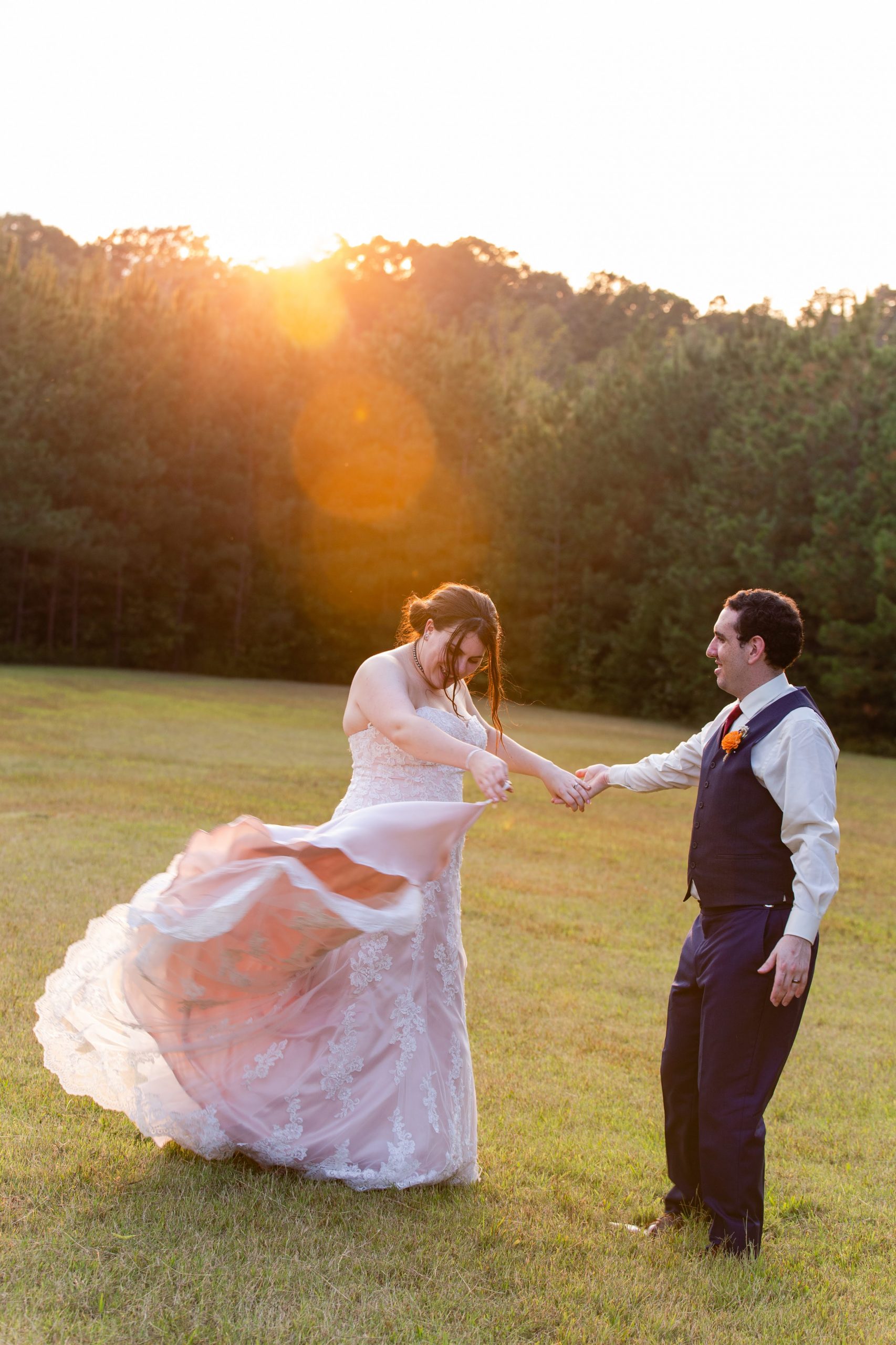