Jasmine & Greg’s Night Under the Stars 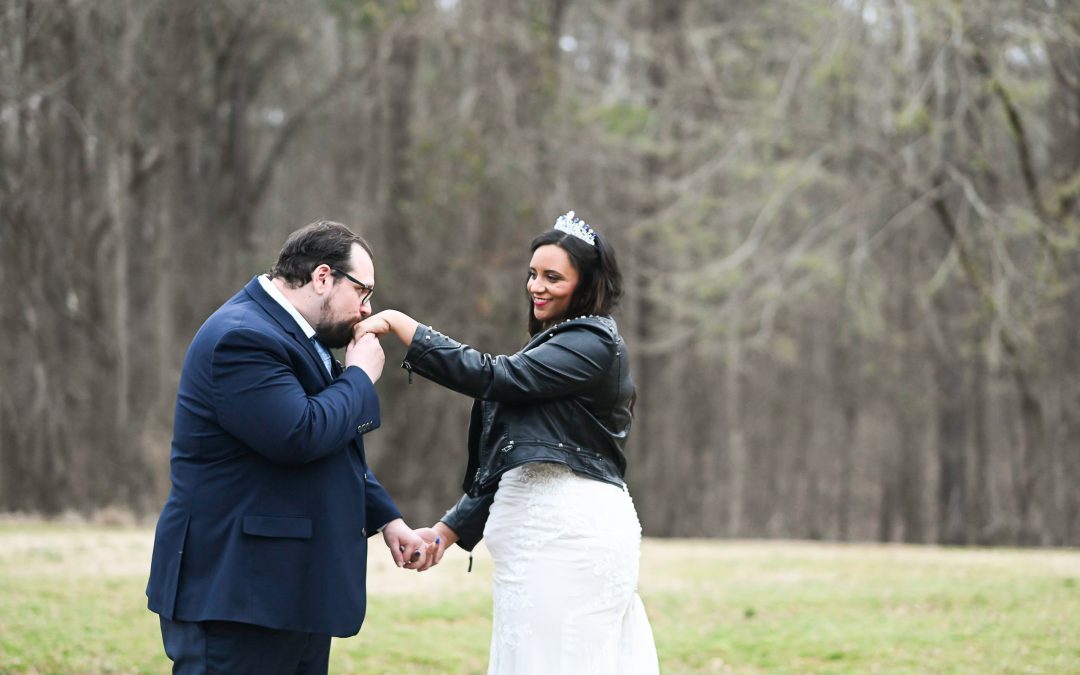 I had the chance to work with Jasmine & Greg for a lot longer than most, and they really put their faith in me… Jasmine inquired about our services on New Year’s Eve 2017, just three months after we started B&BEvents! They booked our partial service package a few months later, wanting a little extra guidance as they saved for and planned out their DIY movie-themed wedding.

We worked together to build their budget and planning timeline, and I recommended Sugarneck as their venue, which they booked for Fall 2020. They handled most of the planning and the rest of their vendors, and we touched base every few months for two years, but by Summer 2020, our conversations changed from wrapping up plans to postponing their date.

Needless to say, when Jasmine & Greg said their vows in front of their friends and family on March 13, 2021, we were all so glad the day had finally come. Their theme was “A Night Under the Stars!” for their shared love of movies, and all the songs they chose were from movies and TV shows. The real star was Jasmine, in her glam rock princess outfit; her confidence was out of this world, in part because she started her day with a boudoir session!

Feeling like her best self, Jasmine met Greg on the patio outside the farmhouse for a sweet first look, followed by couple and wedding party photos. Playful and fun, the bridesmaids and groomsmen kept the nerves away as the ceremony drew near. Guests began arriving, greeted by a welcome table that included a cards and gifts basket and a small bag for each guest containing sanitizer, a mask, and colored wristbands to show gathering comfort levels. Programs were in a small picnic basket and featured a note to guests, a request for an unplugged ceremony, an outline of the ceremony and wedding party, their love story, order of events, and a crossword puzzle!

There was a buzz of excitement as we lined up the wedding party before the ceremony procession, pinned the groomsmen with their lego boutonnieres, and handed the bride her broach bouquet. With everyone ready to go, I took down the ribbon reserving the front row of the ceremony seats, nodded to the DJ, and went back to the farmhouse where the wedding party, family, and couple waited in anticipation. The Jurrasic Park main theme began, and we started sending folks down the aisle, with Jasmine’s mom acting as the flower girl. Once everyone but the bride was in place, the song switched to the Vitamin String Quartet version of ‘A Thousand Years’ as Jasmine was escorted by her brother Adam.

During the sweet ceremony led by Daybreak Ceremonies, ‘From Beginning to End’ by Robert Fulghum was read by a groomsman, and the couple chose to do a planting ceremony while ‘How Long Will I Love You’ by Ellie Goulding played. “Instead of a tree we’re going to be using a rose bush because marriage is full of the wonderful moments (the roses) but we’re also on board for the harder times (the thorns),” Jasmine shared. The bush was in a pot, and the couple each added soil from a place that’s special to them, along with some water.

Cocktail hour followed the ceremony; guests roamed around the property and visited the bar shack while the couple ran off for family formals. Along with beer and wine, the bar served a vodka + cranberry, lime juice, and grenadine signature cocktail called The Danger Zone, named in reference to Archer, one of Jasmine’s favorite TV shows.

Inside the reception barn, wood farm tables were decorated with centerpieces of Jasmine’s design; a combo of colored LED lights, flowers and water in glass bulbs, candles, and scattered jewels. Place settings featured a flat gold charger, navy blue plates, napkins folded in a bow with a studded napkin wrap, flatware, and a name card. Rather than table numbers, each table featured a different movie title that the couple love, from The Little Mermaid and Jurassic Park to Evil Dead 2 and Apocalypse Now. Between the venue rafter lights, the glowing centerpieces, and the blue uplights, it felt like a red carpet affair.

After the wedding party and couple made their way into the reception space, guests were invited to participate in a group activity. Jasmine & Greg took seats in the middle of the dance floor and a bridesmaid led the shoe game – with a twist. Every guest, along with the couple, had a paddle with a childhood photo of the bride and groom on either side, and everyone raised the face of the partner who the question best described. With laughter still on everyone’s face, the City BBQ buffet was opened and guests were released table by table.

“Stephanie was a superstar. I originally planned to hire her for just day-of-coordination but after meeting and talking with her we decided on her partial planning package instead. I’m a bit of a control freak and I’ve been waiting to plan my wedding since I was a child. So I was pretty certain I could handle things myself. I’m so glad that I went with her though! She was so great to work with. She got super excited with me about my plans and had such awesome ideas herself. She also knows her stuff and is so well organized and has all the tools in place to help even the most unorganized bride have the day of her dreams. She was very realistic with me without ever shooting down any of my plans or ideas. If there was something that I wanted to do but wasn’t sure how to make it work I knew that I could count on her. I got engaged back in 2017 and we planned to get married in September of 2020. The pandemic was simply a nightmare that no bride could have planned for. March of 2020 I was supposed to be 6 months from my wedding and the world was on lockdown. Stephanie was my lighthouse in that storm of a scenario. She worked to make sure that I remained calm, despite my family experiencing the loss of my father and me having to teach during a pandemic. Stephanie worked hard to make sure all of our vendors were up to date with any changes, that our guests would feel safe and comfortable, and that even though it was different than originally planned it still remained the day of my dreams. It was so nice to know that she was on my team. The day of the wedding all I had to do was sit back and enjoy the day because I knew everything was being handled by Stephanie and her awesome team. So if you’re getting married then please do yourself a huge favor and hire Beauty and the Budget. She will be your rock star and the vendor you can’t do without!”

Once dinner was wrapped up, the couple was showered with love during heartfelt toasts before heading to their magically lit dessert table featuring cupcakes and a rock-candy cutting cake made by Jasmine’s bridesman. Formal dances followed, with Jasmine & Greg dancing to Frankie Valli’s ‘Can’t take my eyes off you.’ Greg and his mom then danced to ‘Brown Eyed Girl’ by Van Morrison, and Jasmine danced with her brother to ‘Husavik’ from EuroVision.

Instead of a bouquet or garter toss, they did a movie raffle! Each guest had a ticket behind their place card, and the winners got gift baskets containing Jasmine & Greg’s favorite movies and snacks. A table in the corner of the room housed a guest book photo mat for people to sign, along with a small memorial photo for Jasmine’s dad, who passed away shortly before the wedding. Guests – grandma in particular – filled the dancefloor for the remainder of the night, as well as roaming between the barn, bar, and bonfire until ‘Save the last dance for me’ by Michael Buble marked the end of the night. HMUA: Made Beautiful by Roya