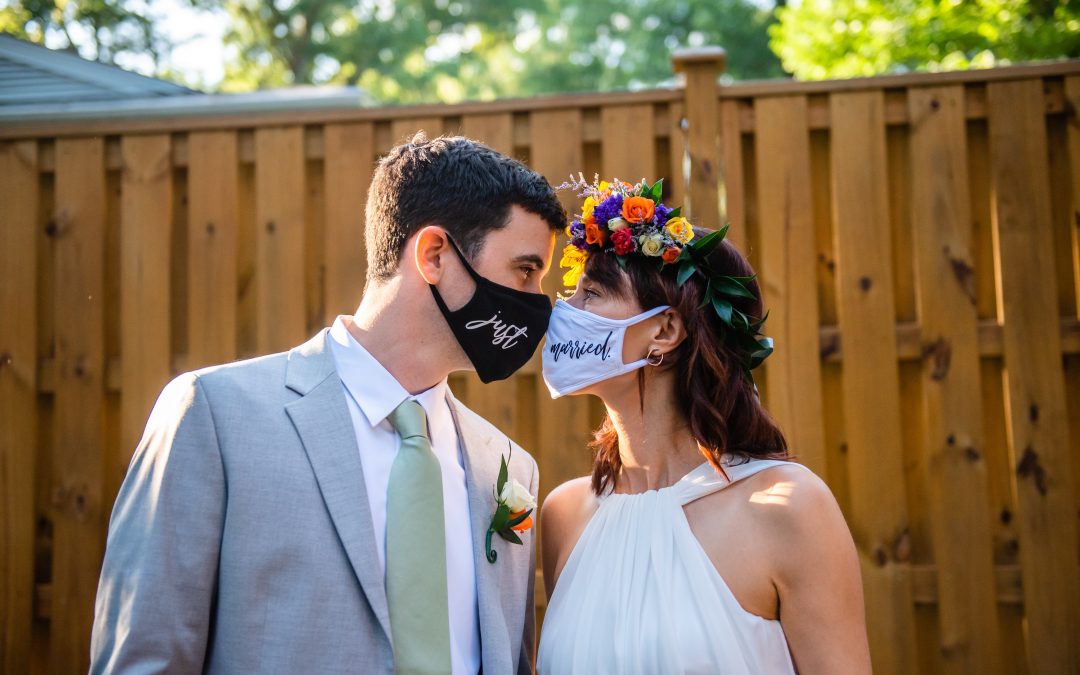 Zack & Tina had a wedding they never would have dreamed of, and they enjoyed every moment of it.

They’d planned for an intimate wedding with 50 guests in the summer of 2020, so when COVID-19 came through and wrecked everyone’s plans, we had to put our heads together (virtually, of course) to keep up with the changing news and gathering restrictions – which included two date changes and guest count reduction. We’d already spent months together designing a day that intimately celebrated their relationship and personalities, so by June, it felt natural enough to transition their wedding to an at-home elopement with just their parents as witnesses.

Zack & Tina went to work on a few of the DIY projects they’d planned for the big wedding – which was rescheduled for their first anniversary in 2021 – and thinking about which decor elements and vendors they wanted to keep the same for their elopement. We were able to work with the originally planned florist, officiant, baker, and rental company, who all played a role in designing the day, before and after ‘rona changed things up.

I arrived at their Carrboro home in the late afternoon, and with my gloves, face mask and rentals in hand, I began turning their dining room and backyard into the perfect backdrop for their special day. Shortly after, their parents arrived, and the couple went their separate ways within the house to get ready.

When I first started working with Tina & Zack on their design, they shared how bicycles had been a reoccurring element in their early love story, so we decided to create a wall backdrop to celebrate this. They collected, assembled and painted the frame, and the florist took it from there! It was in front of this installation that Zack stood as he awaited his first glimpse of Tina in her wedding attire. She joyfully danced out to him, her flowing ASOS dress twirling playfully, a bright flower crown atop her head. 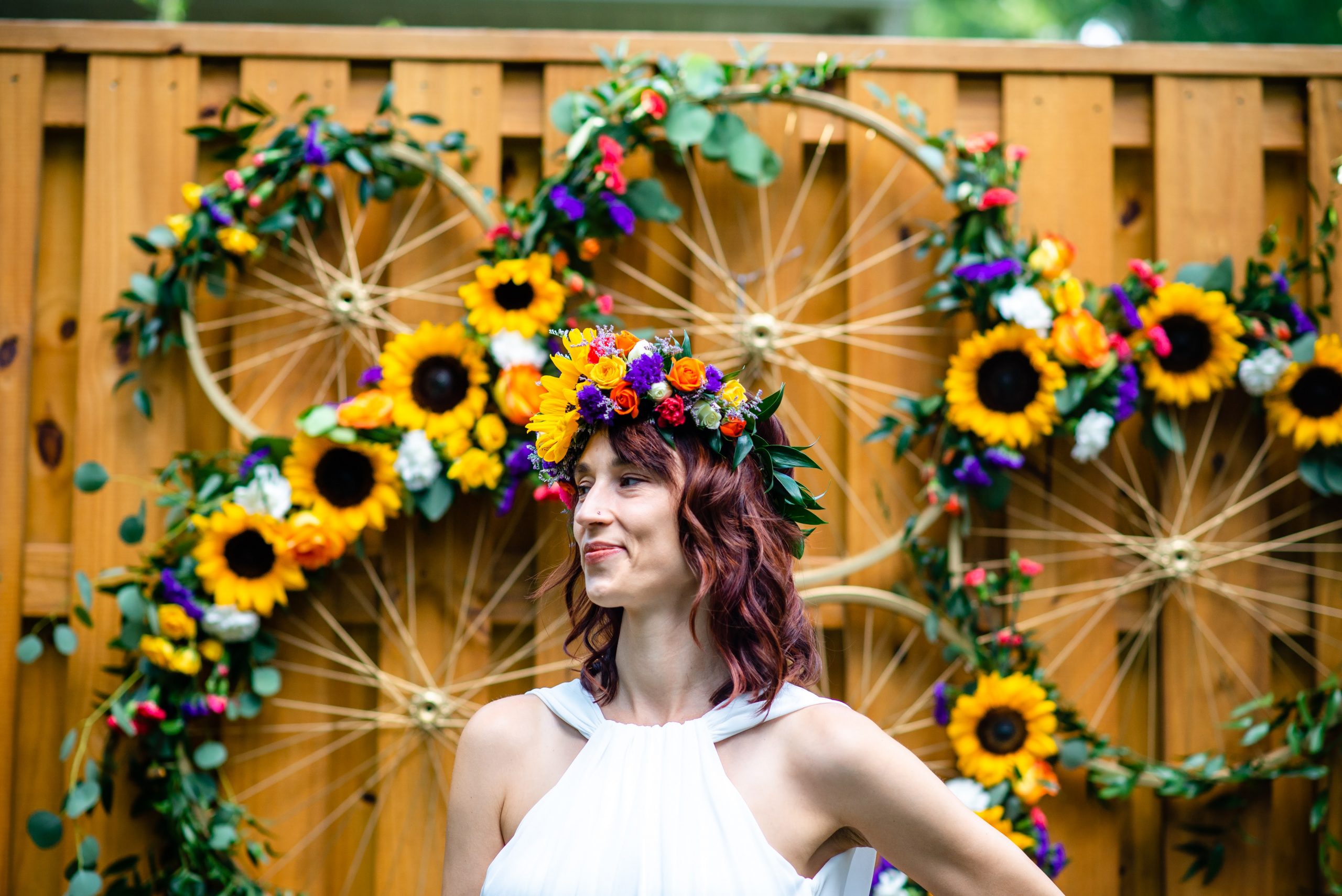 After some photos with their families, Tina went inside to freshen up while Zack and I set up the final touches – a bubble machine and his GoPro to record and later share the ceremony. The officiant and Zack stepped up to their socially distant spots, the three guests were in their seats, and I pressed play on “You are the Sunshine in my Life” by Stevie Wonder. Tina, carrying a vibrant tambourine bouquet, was escorted down the flower-petal covered pathway by her dad, who took the final seat as Tina & Zack smiled at each other brightly.

In addition to the beautiful ceremony words, vows and rings, they decided to include a Tibetan Singing Bowl ceremony. They have been slowly collecting the singing bowls, and during their ceremony, Zack surprised Tina with the addition of a new bowl that was from the 18th century. Traditionally used for meditation, deep relaxation, and healing, the couple has used them during their relationship to pause a fight, fear, or moment of hurt and come back together. They included them during their ceremony to bring peace and calm into their marriage, letting the bowls sing out brightly.

As the ceremony came to a close, Stevie Wonder’s “Signed, Sealed Delivered!” played while a shower of bubbles and laughter covered the couple. Shortly after, Zack & Tina cut the ohmygoshsogood, blueberry-filled vegan cake. Champagne was popped, and the family took turns toasting the newlyweds and presenting gifts. They took photos, threw flower petals, blew bubbles, hula hooped, and finally made their way inside for dinner. 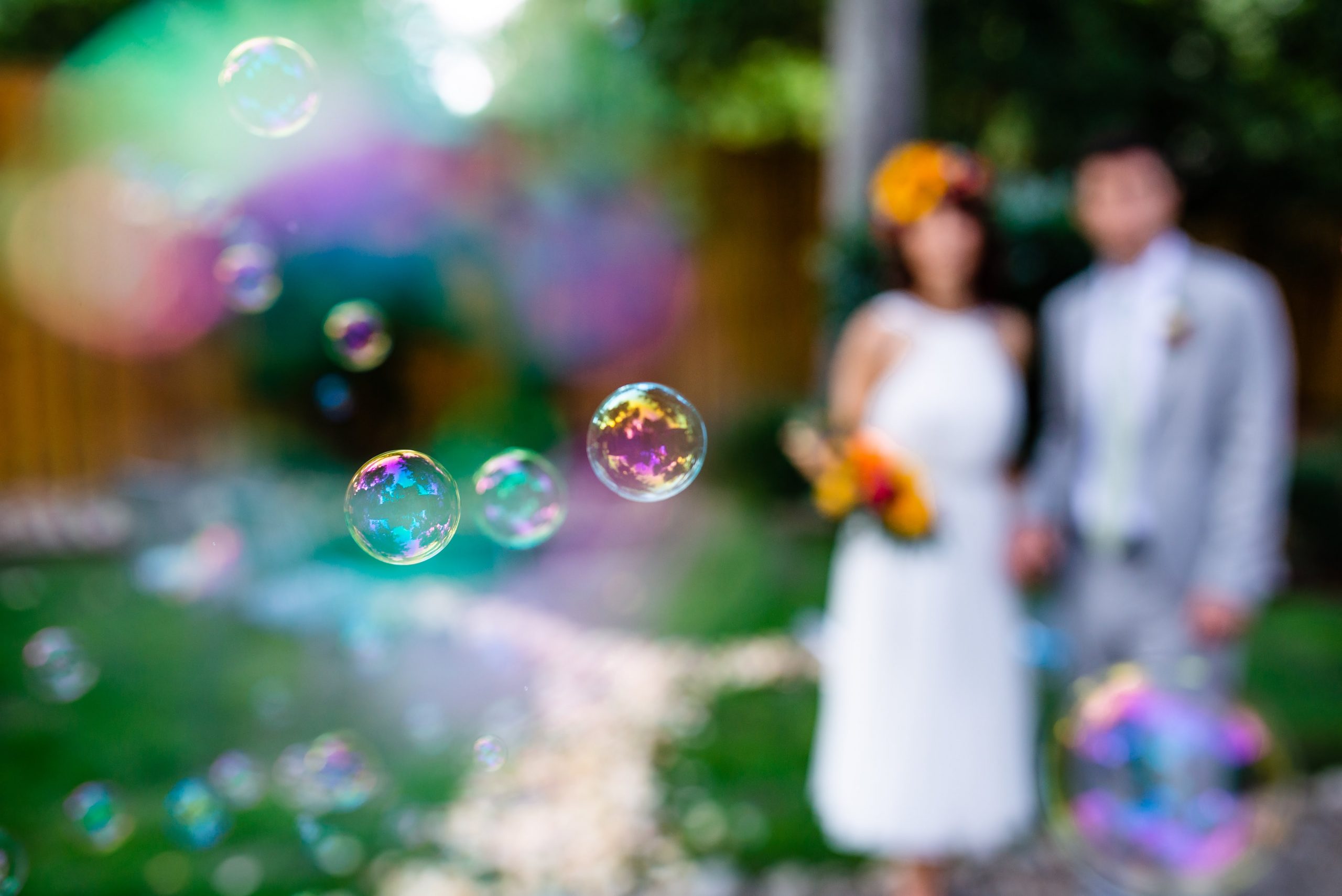 Just as every relationship requires a balance and a cohesiveness that allows each partner to show the best of themselves, we wanted their dinner table to truly reflect each of their preferences and personalities. Tina’s vibrant and wild personality made its way to the design in the centerpiece, which consisted of a mint table runner, mismatched amber goblets, gold geometric prisms, and a bright flower arrangement at the center. With Zack’s love of modern details and his calming presence, we opted for white place settings with name cards and a pop of mint in the napkin, creating a strong and secure border to frame and balance the bold colors.

“Beauty & the Budget Events was fantastic in planning our 2020 wedding ceremony. We had to change our plans due to covid-19 and B&B Events were flexible and adaptable when we had to change our larger wedding to an elopement ceremony in our backyard. Everything was perfect! We needed a lot of assistance with our wedding design plan and B&B Events quickly understood our style. She combined my fun and colorful style to my partner’s modern and clean style. Everything was absolutely beautiful from the cake table decorations, reception dinner decorations, and our selfie backdrop! B&B Events was always professional, responsive and went above and beyond to make my wedding day super special! I highly recommend B&B Events for coordinating your wedding day!” – Tina